OneChunk CPU Pre-Announcement (X86_64 & ARM64)
Over on the [email protected] discord, Boysanic ("Boincboi"), Matt (Stronghold simulation coding), other developers and I have been discussing and planning a rollout of our first CPU application. This OneChunk project is "a BOINC project in the works. Our goal is to find all world seeds w/ at least an 11 eye portal in MC Java 1.7.10". So, if this all works out, "you'll finally be able to say you've found an 11 eye portal by yourself!"

Essentially, we are combining parts of the "SSG" (Seed-Speedrun) and 11-eye portal seed-filtering programs together to go through a large dataset. This input file is 9GB in size, but we plan to split it up into many small manageable tasks to be distributed through BOINC, which is where you come in! Going through a 320kb sample input takes a 4.8GHz Ryzen 5800 (the fastest single-core CPU) around 2 minutes, simulating and checking over 5,220 worldseeds a second. A 2GHz Raspberry Pi 4, with 64bit Raspbian manages to compute 1,370 worldseeds a second, making it around 3.8x slower but much more efficient. (45W vs 5W)

Thanks to work by other developers, I have tested and confirmed that both x86_64 ("64bit Windows and Linux") and ARM64 (64bit Linux ARMv8) configurations will work. The OneChunk 'Filter9000' BOINC application is single-threaded, but will likely have multiple tasks running concurrently on your computer to best utilize its resources and scale to your unique hardware configurations. For 'PC' requirements, we suggest Ubuntu 18.04/20.04 64bit or Windows 7 / 10 64bit, running on an CPU such as an AMD FX or Intel 1st Gen Core i5/i7 CPU or newer.

If anyone has a Raspberry Pi 3(B/B+) or 4, we would like to invite you to install the latest 64bit Raspbian on a spare SDcard in preparation. We also expect Nvidia Jetson Nano/TX1/Xavier devices with Ubuntu 18.04 64bit or newer to successfully run our Arm64 tasks, once we configure our BOINC server to provide and schedule tasks for this platform.

Please follow instructions on the Raspberry Pi website, but we suggest that more experienced Pi users join us for this experiment! OS image below:
https://downloads.raspberrypi.org/raspios_arm64/images/raspios_arm64-2021-04-09/2021-03-04-raspios-buster-arm64.zip

23 tall blocks cactus found by PDW and edjotron
We've discovered the first naturally generated 23-Tall Cactus! Thanks to PDW and Edjotron, we can now confirm that the tallest is 23 blocks. To see this cacti in its natural habitat, right by a Mesa, please input the seed

on 1.14 and use to teleport to it, right next to the badlands!

As some of you may have seen on the BOINC Forums News updates, developers Balint, Hy and Boincboi have confirmed stability of our new optimization updates. These optimizations to Kaktwoos will allow many models of AMD GPUs to get between 30 and 50% performance, like the RX 480 and RX Vega series. Additionally, some RTX 2000 series graphics cards may see small boost in speed, of 5-10%, while a few (such as an RTX 2060) may see up to 75% more performance!

This means almost all of you can compute cacti much faster, as we launch the next round of Kaktwoos at y=65 shortly. 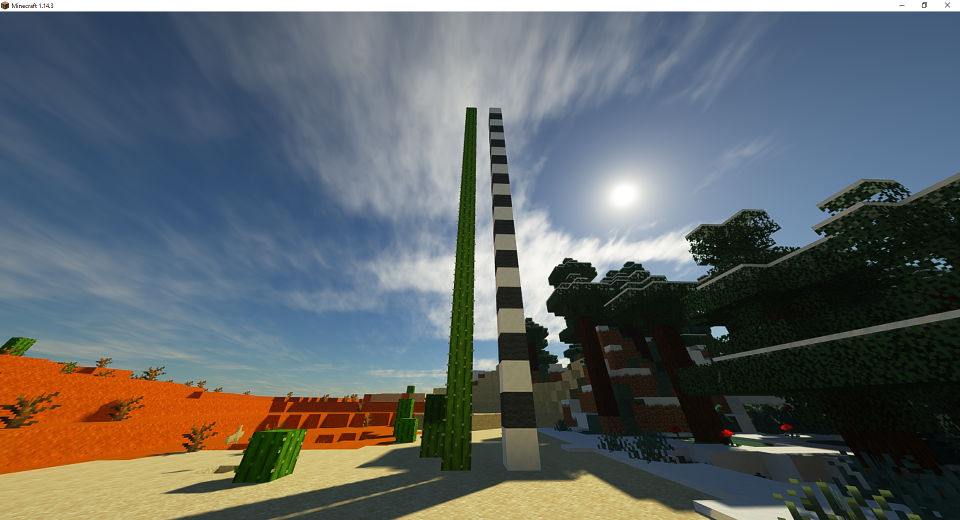 The Grand BOINCale for Kaktwoos?
We apologize yet again for the lack of work over the past month and a half, since all of you had last BOINC'd to solve Minecraft’s tallest cactus mystery. Now, after improving Kaktwoos’ ease of use for our developers we are ready for one last, hopefully long round of cactus stacking and chunk smashing with our fellow cacti enthusiasts. Thanks to some changes behind the scenes, our developers no longer have to painfully modify many configuration files and verify multiple server adjustments (as mentioned in our previous post). At most now they will only have to change two numbers and send work out, as all of the preliminary seeds have been pre-loaded for BOINC to work off of! So, how much work do we expect to generate over the next few days?

Well for starters, an average run of ‘Kaktwoos’ per block layer (y-level) creates 120,000 tasks at a minimum, and each task takes a midrange gaming GPU at least an hour to complete. We have at least 10 layers planned to be checked for 23 and 24-block tall cacti, making this one of our most comprehensive searches yet. Even with 1000 users computing away 24/7, we can imagine this work, and reviewing all the data from it will take at least *60* days. This doesn’t even include that the seeds we are working on are only a fraction of the potential cacti to be stacked, though are the most likely to successfully merge into Tall Cacti at these unusual heights.

So, how high up in a desert do you think we can find tall cacti? Will ‘Superflat’ presets be the final destination for outrageously tall cacti searches? Join us now at [email protected] to find out, and bring back immense compute power to our BOINC network! We recommend anyone with a Windows 7/10 64bit and Ubuntu 18.04 or newer OS to join, and especially those with an AMD RX 460, GTX 750ti or newer/faster. Intel Graphics are supported as well, and multiple GPU systems are in high demand and very capable to assist us. If you’re in the Northern Hemisphere feeling cold and isolated this winter, why not BOINC with us and chat in our Discord server https://discord.gg/xArErFf , or pay a visit to our messaging board?

If you have already begun the penultimate search for ‘stacctus’ with us already, try to find your own tall cacti under ‘Your Tasks’ in the BOINC client’s ‘Advanced View’, then by clicking on the task number inside your browser. Inside those logs maybe there’s a chance you’ll find a 22 or taller ‘natural’ cactus of your own, that you can build by and share with us. We will be posting updates often to announce any interesting findings from your hard work, so stay tuned in the upcoming weeks for more.
27 Jan 2021, 21:18:34 UTC · Discuss

From sandy valleys, up to sand dune peaks. Kaktoos rises to the challenge!
After a somewhat long hiatus, Kaktoos is coming back for another round in the ring, and this time at higher and higher heights. Many of us who contribute to the project ([email protected]) got a little busy with school/work after the Pack project concluded, so I apologize on everyone’s behalf for the silence and uncertainty as of late.

As for where we left off, the y=62 search wasn’t as fruitful as we would have liked. No taller cacti had been found at this height than were found at the slightly higher height, y=63.

This time around, we’ve flipped the script, and different heights can now easily be run at the same time or in series, with 0 program changes. Effectively we’ll be able to get the final answers we’re looking for from the kaktoos project much easier and without as much “red tape” as there usually is with program changes due to security reasons.

What does this mean for you?

This means more kaktoos, more often, and with less breaks between runs for the foreseeable future.

There’s some limits to how many heights we can attempt since there comes a point where you simply will not find any cactus, however, we have a fair range to work with now with these new changes in play.

We’ll be launching a run of kaktoos very shortly. We’ve been testing this in beta with a height value of 64 for a short period of time to make sure that things are running as smoothly as we would like, but we’re happy to announce that we’re ready to go!

Some have offered far more support than we ever expected during this beta, which definitely surprised us! We’re grateful for everyone’s enthusiasm, even if it’s to our own disadvantage to have this run done so quickly.

That said, happy crunching! Kaktoos runs will begin soon outside of beta. Thank you all for the support and understanding over the last couple months as we work through things.
6 Dec 2020, 20:05:33 UTC · Discuss